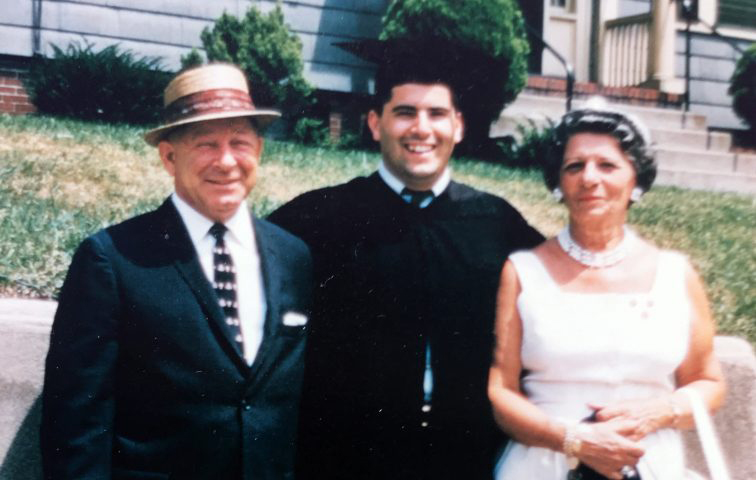 August 11, 2018 – I spent a few days at Woodmont, Connecticut this week. So many memories/stories. I will get to them later. My visit there made me want to go back to my Blog and write more of my stories. In going through my notes, I found this essay of an interview with my nephew Evan and myself. Evan, is my brother Michael’s son. Evan was in college at the time. 1990 ish U of Penn. An assignment: Someone Who Lived Through the Depression/WWII As a Young Adult.

As I reread this essay: I wonder at the wisdom of predicting the future. We can only hope that our behavior is “Just”. We make decisions based upon our personal experiences; and hopefully, practice compassion and fairness.

I will comment, in another blog post, my thoughts and memories of the time Evan interviewed me and the experiences of my growing up during “depression-WWII”.

“The pendulum has gone full swing, from unquestioning loyalty and political naivety, during World War II, to the radical intellectual rebellion against authority during the sixties. The generation that survived the depression, (as children), and WWII, was a society with deep national pride. They did not question authority and were completely loyal to their Leaders. Franklin D. Rosevelt was the charismatic President who mobilized and entire country for World War II. Society was unquestionably behind the Allied Effort. The People believed that the U.S. was the pure defender of a Free Society. Corruption was not an issue, the general public did not understand the true workings of politics. The public went through a transformation which began in the fifties and progressed throughout the sixties and seventies. The generation that was raised during the depression and fought in WWII was engulfed in the entire swing. Joy Glanz Pite Solomon was one of the Americans of that generation. My Aunt Joy was born January 19, 1926, to Joseph and Nettie (Kellert) Glanz, descendants of German/Russian Jewish immigrants. Joy grew up in New Haven, Connecticut, during the depression. My grandfather, Joe Glanz, was an innovative entrepreneur, who owned several gas stations. When the great depression hit, Joe did not sit back and accept the tough times. He was one of the first businessmen to give “promotionals”. If you took your business to Joe, (as he was affectionally known to all), you would get something in return. The depression did not hit the Glanz family as hard as others. Joe’s keen business sense held his company together. Politically, they were always devoted Democrats and never doubted that F.D.R. would eventually pull the economy out of the depression. (side note: W.P.A./C.C.C camps: more on that another time).

According to my Aunt Joy: “Everyone loved F.D.R., “my own Mother thought that the sun, the moon, and the stars, set on him”

Roosevelt’s intentions or image were never questioned. The people were comforted by his complete power and were one hundred percent behind his effort in World War II.

WWII resulted in great American suffering; but a victory that propelled the country to the top. Ninety percent of my Aunt’s high school class died in the Battle of The Bulge. Here fiancé, Carl Pite, returned from France with half of his calf blown off. She suffered just like thousands of other Americans. These people felt the U.S. had fought for victory and had the right to defend democratic societies throughout the world. They knew That the U.S was on top and felt that its Politics were correct.

Joy was not very concerned with the policies during the Truman Administration. Yet, she liked Truman and spoke highly of him for several reasons. He was a family man, from a a rural area. He had worked hard for his success and, in Joy’s eyes, was very trustworthy. However, she was fond of Truman for superficial reasons, not his policies or programs. My Aunt had no opinion on Korea, and honestly knew very little about it. She did not think of it as a war, and felt Truman was capable of controlling the situation. My Aunt supported Truman because of his image, and was completely devoted to the Kennedys for similar reasons. She supported Kennedy’s Democratic Liberal platform, and was enchanted with his outward image. The “Camelot Presidency” seemed pure and honest. People had unquestionable faith in Kennedy and his New Generation.

Continuing, the Post War Era was a happy time for Joy. The death and destruction was over; and people needed to make up for lost time with loved ones. Joy’s generation had lost a great deal of their childhood. They grew up fast, and it was time to go back to school and have fun. Joy’s husband, Carl Pite, attended Yale and she became interested in the arts and theatre. Later, while raising a family, Joy became interested in politics. Just as Eisenhower was inactive in the Presidency, so was much of the the public, politically. This period was a much needed rest from politics for the American people. Then, they stepped back and slowly began to take a deeper look into politics.

Joy did take a rest from politics. But, when it come to Senator Joe McCarthy, she could no longer be silent. My Aunt was Anti-McCarthyism and Communism. She was appalled by his tactics and felt personally attacked by, what she felt, his anti-semiticism. McCarthyism and the Red Scare were the beginning of the breakdown of unquestioning trust in the government. Joy did not believe that all of America’s problems were due to Communist traitors. It was the first time in her life the government was being questioned by her. Questioning authority became the theme of the sixties. Joy’s son Stephen was very involved in the movement of the college students. he was a member of Students for a Democratic Society and became deeply involved in the Peace Movement. Kuklick stated that, “the sixties were about anger.” Joy felt that the young people were angry at the establishment and had a right to voice their opinions. “We had our time, so should they.” The pendulum swinging to the other extreme. “The sixties” was a watershed for the American political system. As Kuklick stated, “People realized that the U.S. is not benign; politics is corrupt; we are not racially just.” The major cause of the controversy was the unpopular war in Vietnam.

My Aunt Joy was totally opposed to the Vietnam war and frightened for her two sons who could be drafted. She felt that we had no right to be in Vietnam, and would actually have taken her sons to Canada had they been drafted. In her eyes the only correct war was a World War that was threatening the security of the U.S. She would not sacrifice her son’s lives for a little country in Indochina. Vietnam was the beginning of Joy’s switch of her support to the Republican Party. All her life she had been a Liberal Democrat, but her opinions were changing as the party fell apart after the Johnson Administration.

Kuklick argues, that due to the stress of the war, the Democratic Party split after 1968. The party became solely interested in the proliferation of the Welfare State; and the International American Influence is neglected. Many Liberal Democrats who adhered to global democracy and anti-communisiam switched their allegiances to the Republican Party. My Aunt Joy, was a perfect example. She considered herself a Liberal Democrat, but became a registered Republican. I don’t think that she fully realized the transformation, however her voting record, of the time, is proof of the change. America had been through extreme changes from World War II through the seventies. Society learned that authority was good and secure during the thirties and forties; but began to question that authority in the sixties and seventies. Opposing generations had clashed and now must learn from the conflict.

Today society is not as trusting of the government and is not involved enough. We live in a country were less than half of the population votes for the President. The issues are no longer important, but personal relationships and characteristics are at the forefront. Just look at the media and the top stories. We have to urge the public to get involved and productively effect politics. Fortunately, my Aunt is optimistic, she believes that my generation is intelligent enough to come to a middle ground. A country in which politics can be trusted and society is truly benign.” – Evan glanz