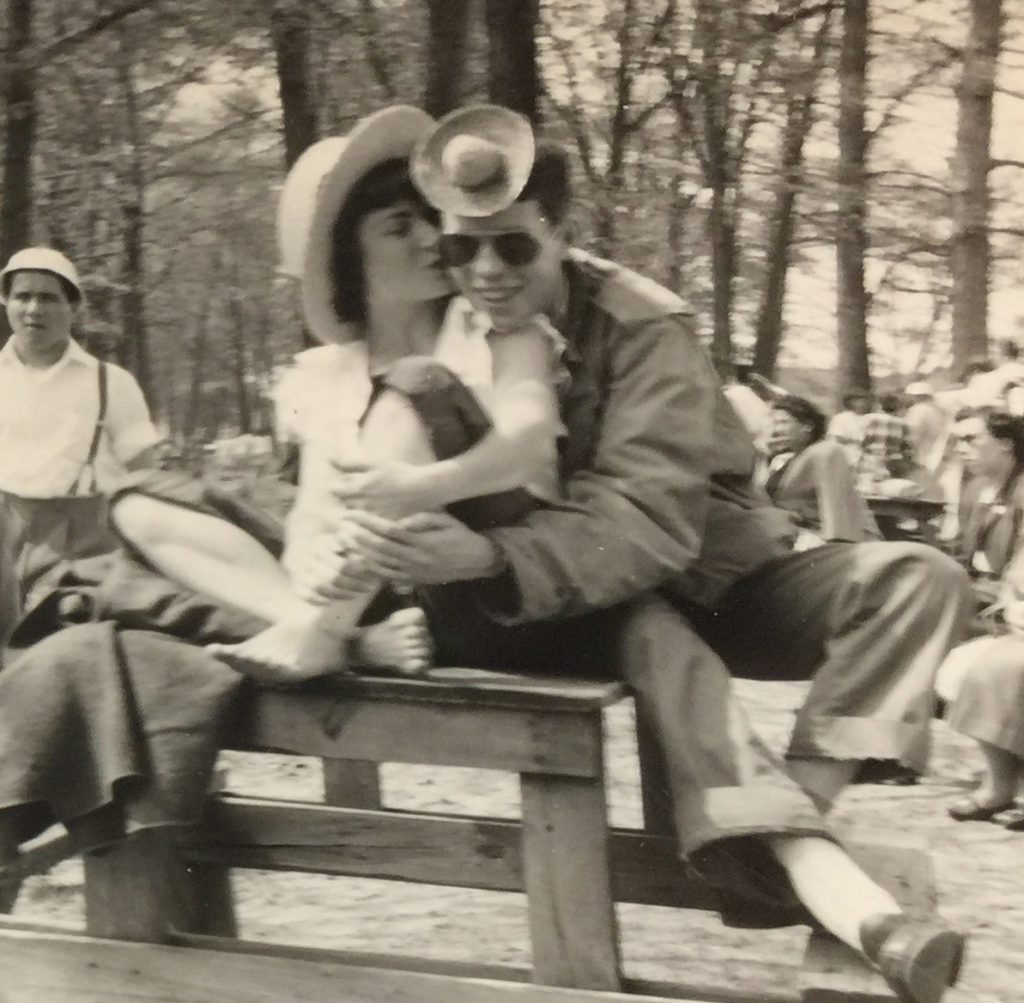 I keep thinking of all that happened during 1926-1967; and get bogged down on how to tell it all.

Think about it—I never had a high school graduation celebration, or a high school prom. WW2 had started. All qualified boys, (most of the senior year boys at Hillhouse), were offered high school diplomas to join the Armed Forces, December 1942. Graduation Diploma: June 1943. I started dating Carl Pite then. What was I–16/17 years old. Going “steady” with a guy in the Army. We married in 1947; after he came back from fighting in the Battle of the Buldge*, and suffering a major leg wound that troubled him his entire life.

When he was wounded, his Mom and Dad received a letter from the Army stating that “your son is seriously wounded and in a hospital somewhere in Europe”. Ed Batter; Belle Pite’s (Mom) brother, was a General, stationed in Europe. He found Carl in a hospital and kept us informed of his condition. Would he lose the leg? After many surgeries, he came home and was sent to Fort Devens hospital in Mass. Belle, my Mom and I, went to see him as soon as they let us. What we did not know was–did he still have both legs? When we saw him—skinny, tired, in hospital clothes, and using crutches, (the first time that he had used them), all we could see was that he was back to us and with both legs. (I still cry when think of that time). *General George Patton. 3rd Army
The Battle of The Buldge was the costliest action ever fought by the US Army which suffered 100,000 casualties. Many boys from my senior high school year did not come back.

When I was a senior in high school I remember the Yale cadets marching in the streets (ROTC). The Glenn Miller band served at Yale. Glenn Miller was lost at sea December 15, 1944. Ray McKinley took over the band at Yale.

I joined the USO in New Haven. We went to parties and danced with the service men. During holidays, my Mom and Dad invited “the boys” to our house to celebrate–Thanksgiving; Hanukkah; Christmas; family holidays with us so they would not be alone).

Carl’s injury, (Purple Heart medal), actually changed his life. He was studying at Vanderbilt Un, intending to go on to medicine. When he came home from fighting in France, he could not stand on his wounded leg for long periods of time during lab study; so, he had to give up that career. Needless to say, he did well as an economist. Undergrad from Yale, and Masters from NYU. We married during Carl’s senior year at Yale. June 15, 1947.
We had a “ball”. I worked for Yale, at New Haven Hospital, doing internal medicine research in Dr. Peter’s lab of Internal Medicine. (I studied Chemistry and Art at Quinnipiac College). We partied/studied/traveled/theatre at the original schubert theatre in New Haven (all the great musicals: Annie Get Your Gun; Carousel; Around The World in 80 Days with Orsen Wells; South Pacific with Mary Martin; Oklahoma; The King and I; The sound of Music. Every one of them-so many that I can’t remember all the names). Dances and “Frat” parties at Yale, and all the Ivy League football games.

The war was over.

When we went to football games, we dresed up: furs, high heals, hats and gloves, big flowers pinned on to our fur coats and plenty of booze. Back to my Mom and Dad’s house at 405 Fountain Street, after the game, to: sober up, warm up, some of Mom’s great soup, and then went out to dinner and parties. All just like you see in the old movies. I remember once, coming home (Mom’s) from a game that had rained and snowed the entire time. We were soaked through and through. All the girls got undressed. even our girdles. (Guess my Dad took care of the Boys); my Mother dried the clothes, and ironed the girdles to dry them-we put the clothes back on, and off to another party.
It was after a terrible war. People were starting to make money again, and the economy was great. All the guys went back to, or started, college, because we had the GI Bill and it paid for their college education. Everyone worked and played hard.

Senior year, married, we lived in Ed and Jan Batter’s apartment that summer. Then, in September, moved to a “cottage in Woodmont, CT. We shared it with Marilyn and Phil Levy. They married September 28 or 29th, 1947. If you remember, Marilyn was my Kindergarten best friend for life.
Carl paced the floor when he studied. As I think back now-strange as his leg always hurt him. So that meant that he had the first floor and Marilyn, Phil, and I were delegated to the second floor where there were 2 bedrooms and 1 bath.
They never complained. Always Best Friends. I miss them terribly. When Carl graduated he got a job in NYC. Working for the government and going to NYU graduate school. We moved, and lived in Bayside, NY—I hated it. Cried all the time. I missed Marilyn, Lorraine, my Mom and Dad and all the “easy” life that I had in New Haven. Finally, we qualified to live in Stuyvesant Town**, in the city. **Stuyvesant Town is a large, post-World War 2 private (Metropolitan Insurance) residential development, on the east side of NYC. Catering to the veterans who had come home and were starting families. I think we paid $28/month for a lovely one bedroom apartment. Surrounded by play grounds and activities for families. Life was great again.